About the app. the development story and inspiration

When the Flutter Puzzle Hack Hackathon was announced, I had just got Covid and was in house quarantine. So in the midst of all the physical as well as psychological symptoms, most importantly, feeling like my life has no meaning, this challenge came to the rescue. It gave me the opportunity to focus all the energy I can summon to work on something I’m extremely passionate about. So I dove in and did nothing but Flutter day and night for a couple of weeks to create my version of the slide puzzle.

I cherished the distraction and brainstormed lots and lots of ideas. I wanted so badly to challenge myself. I had been working with Flutter for about 2.5 years and I felt confident that my skills and experience are up to the challenge. Also, being passionate about and having some experience in graphic & UI design, I knew that I had the ability and opportunity to create something cool visually and programmatically! (Ahm, unicorn developer speaking 🦄) 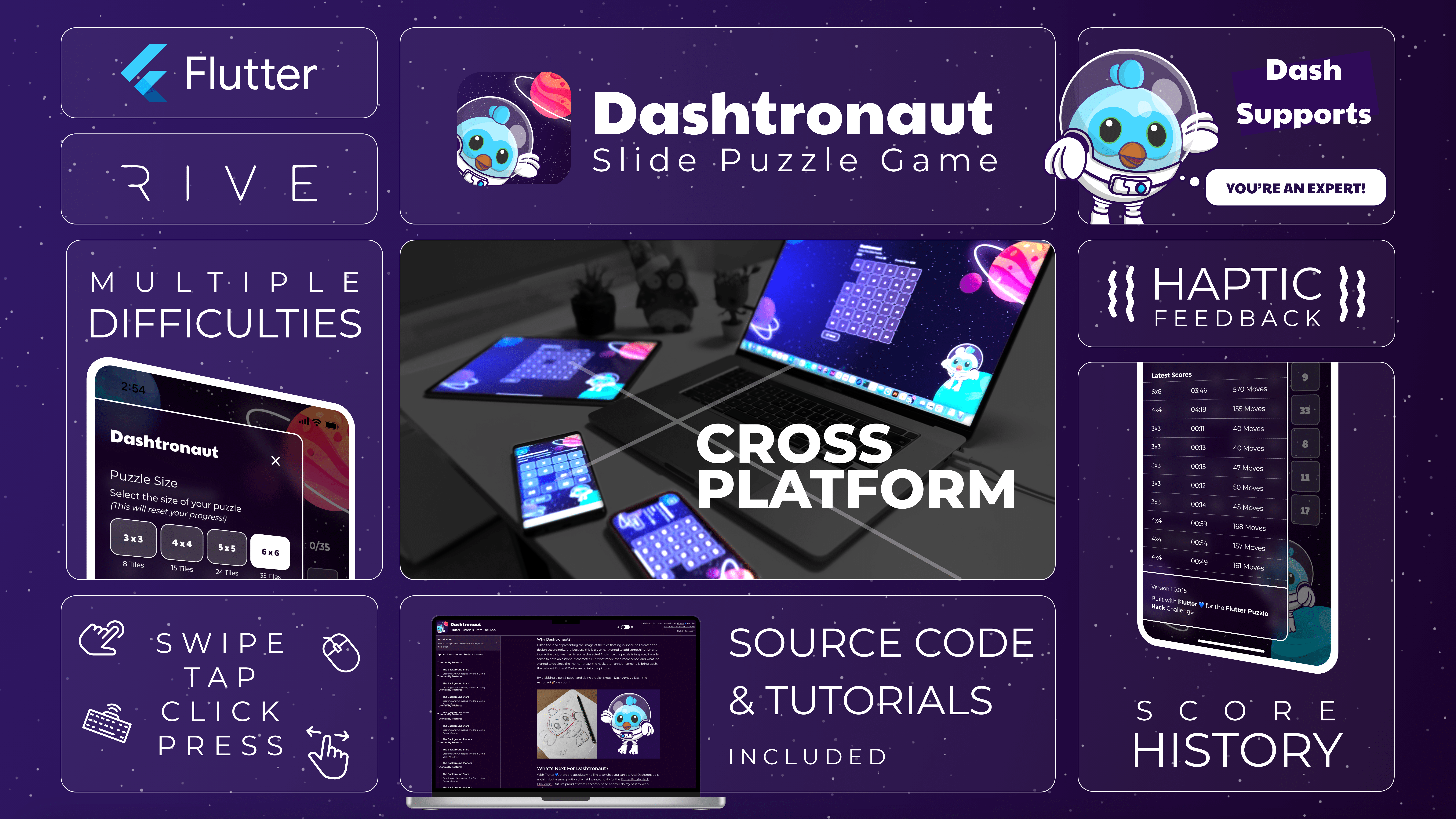 Dashtronaut is a slide puzzle game set out in space with Dashtronaut, Dash the Astronaut, floating in space and interacting with the user. Most of the basic puzzle functionality found in the example app is present in addition to some user experience enhancements, interactivity, and design features including:

I started by reading through the example code made by the awesome people of Very Good Ventures. I learned a lot from it but ended up starting from scratch and only using the puzzle logic (e.g. solvable puzzle algorithm) from the example code. I wanted an empty canvas to spread my ideas on and I wanted to make tweaks on the way the puzzle tiles were laid out and how they interacted with user input.

After doing some planning and typing up some Todo’s in a text note that is growing in length until this very moment, I dove into the development of my slide puzzle version by clearing out the code of the good old Flutter counter app that comes with any new Flutter project and started coding from there.

In the couple of weeks I was quarantined and working only on my slide puzzle, I managed to finish only the basic puzzle logic and layout. I achieved what I had in mind by adding the ability to swipe the tile in the target position direction and have them animate to it. And I added keyboard and mouse support. At this point the puzzle was a skeleton! It looked like this: 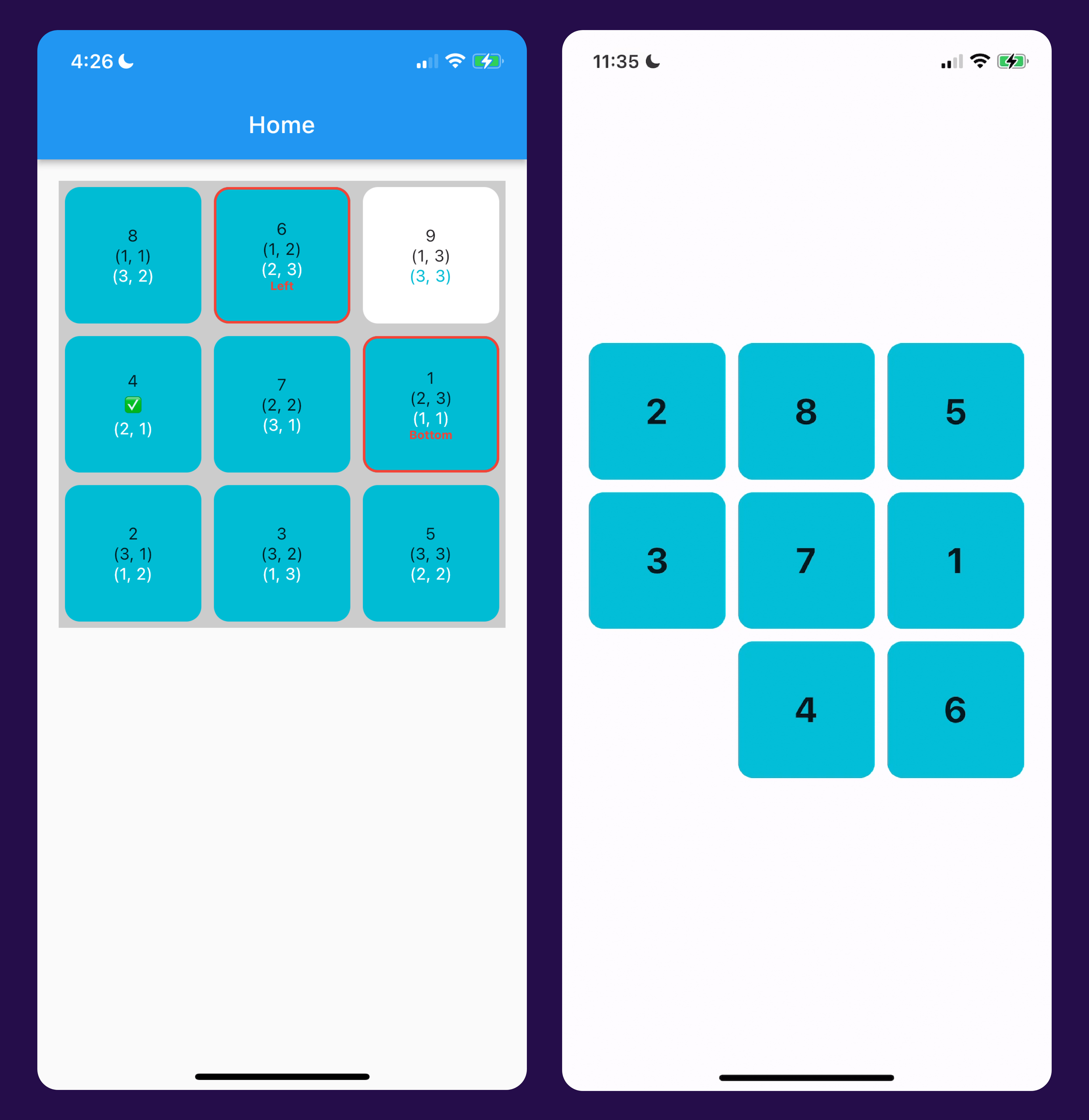 It even had the ability to do this:

Anyway, as soon as the puzzle was in a stable state and I got to the design part, I tested negative for Covid and had to get back to real life and I wasn’t able to focus on the puzzle full-time. So in the remaining weeks before the deadline, in between client projects and my full-time job responsibilities, I squeezed in some hours and was able to create the designs and animations, come up with the Dashtronaut name, buy a domain to host the web app and the app landing page and tutorials pages, which I also built as quickly as I could with pure Html, CSS & JavaScript, deploy the web app, submit the app to the App Store (iOS & MacOS) and to the Google Play Store for Android, and finally, work on the demo video.

I liked the idea of presenting the image of the tiles floating in space, so I created the design accordingly. And because this is a game, I wanted to add something fun and interactive to it, I wanted to add a character! And since the puzzle is in space, it made sense to have an astronaut character. But what made even more sense, and what I’ve wanted to do since the moment I saw the hackathon announcement, is bring Dash, the beloved Flutter & Dart mascot, into the picture!

By grabbing a pen & paper and doing a quick sketch, Dashtronaut, Dash the Astronaut 🚀, was born! 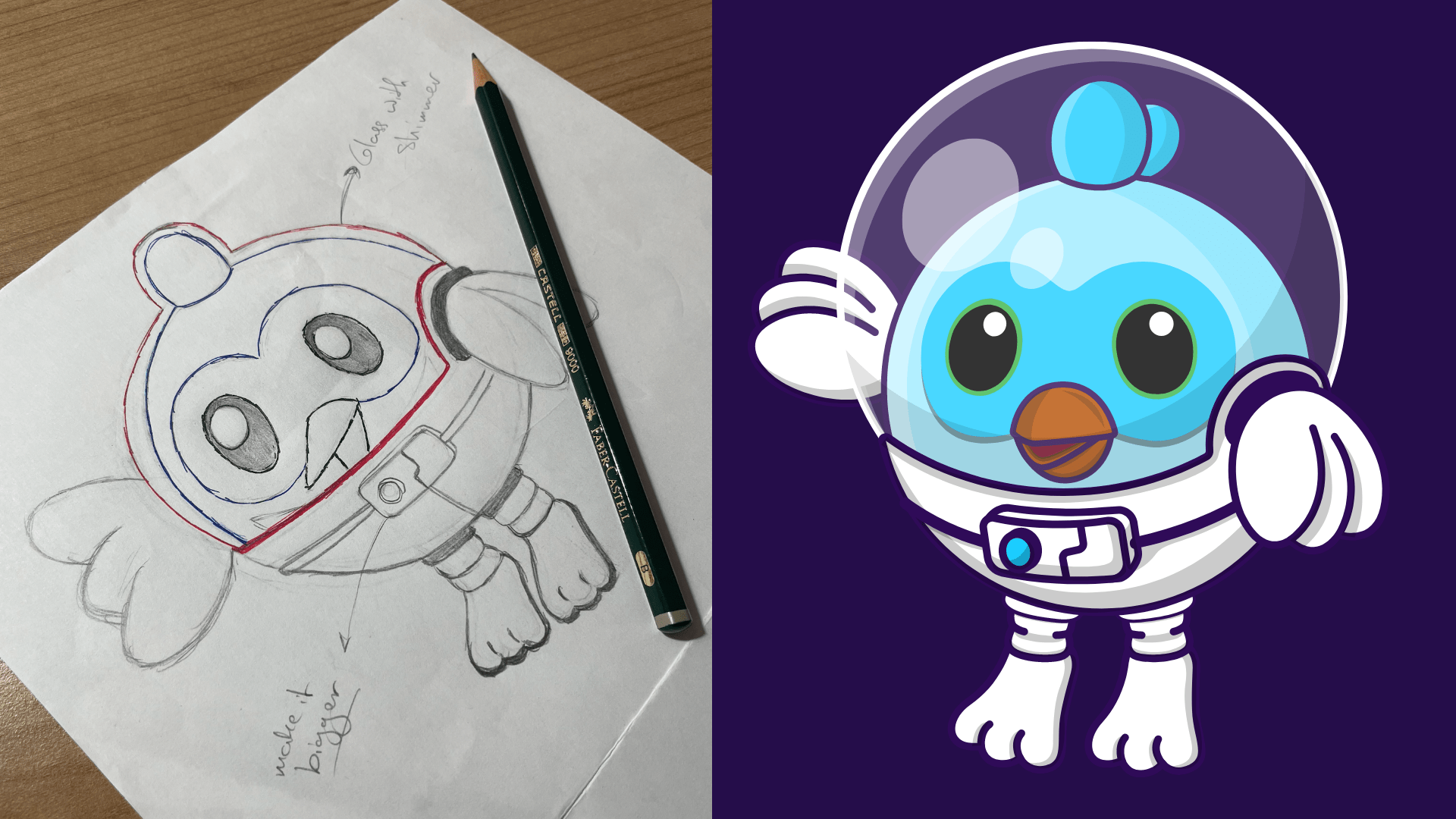 With Flutter 💙, there are absolutely no limits to what you can do. And Dashtronaut is nothing but a small portion of what I wanted to do for the Flutter Puzzle Hack Challenge. But I’m proud of what I accomplished and will do my best to keep updating the app with features in the future. Because it turned out to be an amazingly fun project rich with stuff to learn and teach.

Keep an eye out for new app updates as well as new tutorial additions to this website!

Or try it now